Scoot announces Honolulu to Osaka from $80 each way and Singapore from $200 each way!

The airline is the low cost carrier of Singapore Airlines. They will begin flying from Honolulu on December 19, 2017.  will fly non-stop from Honolulu to Osaka/Kansai, Japan, with continuing service to its main hub in . Passengers traveling between Honolulu and Singapore will have a stopover in Osaka of about 70 minutes. 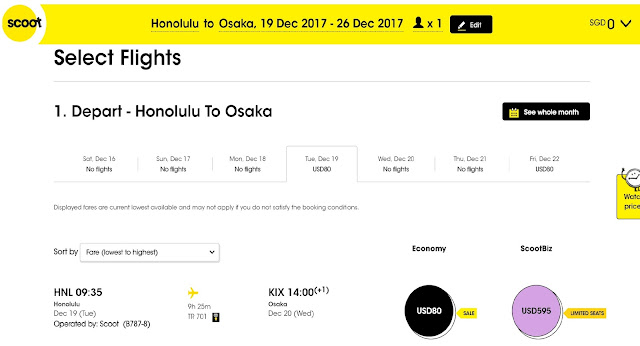 Posted by hawaiitraveldeals at 9:51 PM 4 comments:

Delta has been slowly expanding their services to Hawaii and with these two new routes it will complement their existing services very well. Delta will now operate between Salt Lake City and Kahului with their 767 aircraft which will feature their lie-flat seats in the First Class cabin. Delta will also begin service between Seattle and Lihue utilizing their 757 aircraft . Both routes begin on December 21, 2017.

The new Seattle to Lihue flight will compete directly with Alaska Air's red-eye Seattle flight which should see competitive fares on the route. The new Salt Lake City flight from Maui will offer an additional option to the already very busy Honolulu to Salt Lake City route.

Book at: virginamerica.com or alaskaair.com

Air Asia X announces Honolulu to Osaka and Kuala Lumpur from $99 each way!

The airline is the long-haul unit of Malaysian low-cost carrier AirAsia. They will begin flying from Honolulu on June 28, 2017. will fly non-stop from Honolulu to Osaka/Kansai, Japan, with continuing service to its main hub in . Passengers traveling between Honolulu and Kuala Lumpur will have a stopover in Osaka of about two hours.

Introductory fares on the new route were on sale for as little as $99 one way to Japan and $149 to , though regular fares will be higher.

AirAsia X’s Honolulu-Osaka-Kuala Lumpur service will operate four times a week on 377-seat aircraft. The aircraft include 12 lie-flat seats and 365 economy seats. Fares for the flatbed seats begin at $699 one way during the introductory period.

Travel to Vancouver from $170 on Westjet from Honolulu and Maui

Westjet is offering a great deal from Honolulu and Maui to Vancouver from $170 USD plus tax each way. Flights between Hawaii and Vancouver have been quite high in the recent months due to the peak ski season in British Columbia so an unadvertised sale is a nice break.

Virgin America Announces Flights Between Hawaii and San Francisco from $199 Each Way!

After years of specuulation Virgin America will begin service to Hawaii begining November 2, 2015. Virgin will operate from both Honolulu and Maui to San Francisco. You can expect in the next few days a fare sale as Virgin officially announces their new Hawaii routes. 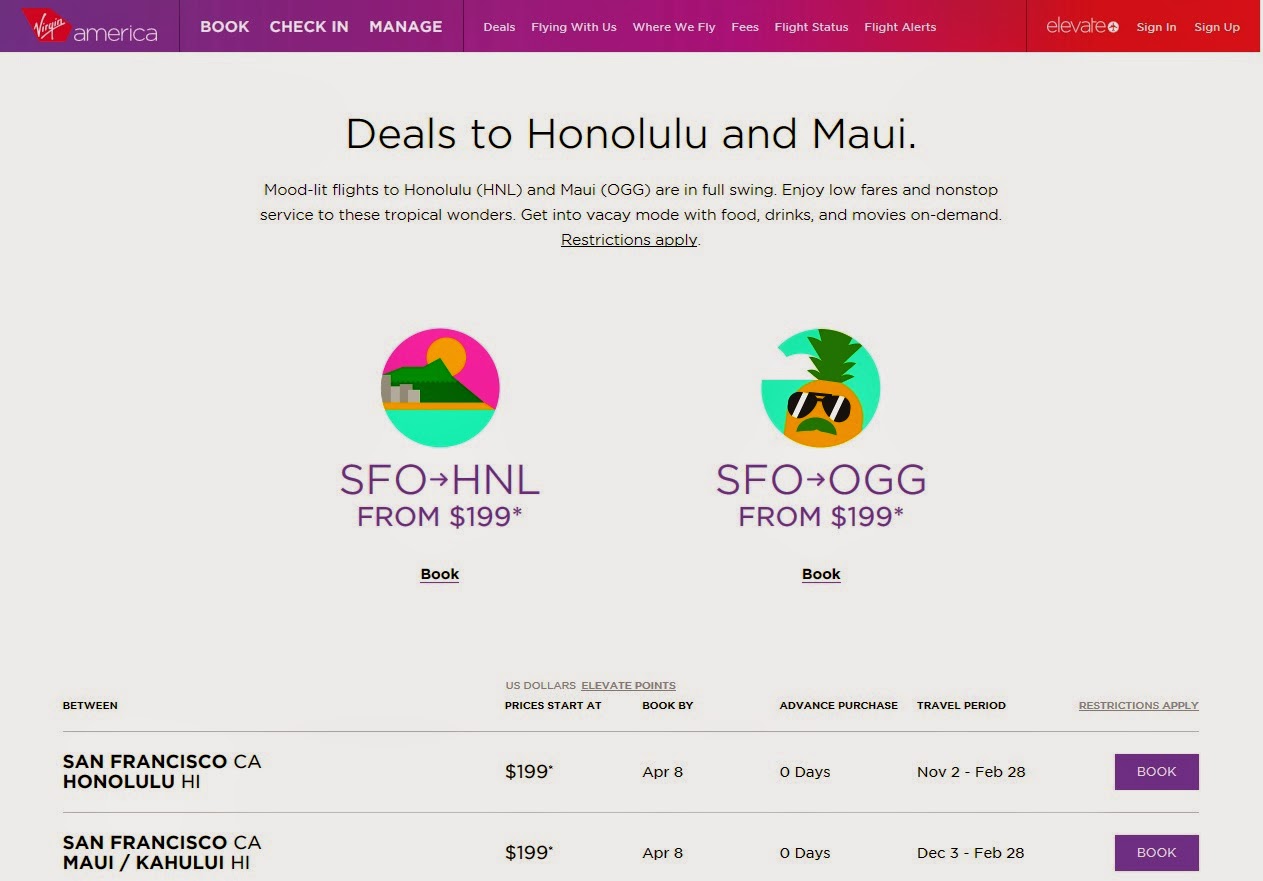 Virgin will be the first and only carrier at the moment to be operating Airbus A320. We expect Virgin to announce more routes to Hawaii in the next few months.

Honolulu to Vancouver, Canada starting at $109 each way!

Westjet is offering a great deal from Honolulu to Vancouver for $109 USD plus tax each way. Flights between Hawaii and Vancouver have been quite high in the recent months so unadvertised sale is a nice break. Flights are limited to a two week period at the end of April and are available from the other islands for slightly more. This is actually one of the cheapest sales we have seen in a few years!

Air Canada rouge announced today new non-stop service between Honolulu and Toronto, Canada beginning November 26, 2014. This new service will operate twice weekly. To promote the new route, Air Canada rouge is offering savings of 20 per cent on bookings made by June 10, 2014 for travel until April 30, 2015 using the promotion code "aloharouge."

These new announcements will effectively put an end to Air Canada's mainline service to Hawaii.

Jetstar Airways announced today new non-stop service between Honolulu and Brisbane, Australia beginning December 15. This new service will be a twice weekly with a third added during peak periods.
They are commemorating the start of this service with a special fare. Fares start at $299 for economy and $799 for business class each way.

Keep in mind the fares above exclude all applicable taxes.
Airline:
Jetstar Airways

Here is the best hotel deal that we have ever seen for Honolulu. Ala Moana hotel is offering a special $10.00 plus tax per night special. Hotel rooms at this resort normally start at $139.00 per night. The hotel is located in a prime location next to the Ala Moana shopping center and at the entrance of Waikiki.

View and book the special thru this link.

Here are the details:

- Only 20 rooms per night available

- No refunds for changes or cancellations

- Web booking only, no phone calls

- Cannot be combined with other offers.

- Taxes are not included.

Posted by hawaiitraveldeals at 9:14 PM 3 comments:

Be the first to hear about all the great deals by subscribing to our free newsletter!

We are the first to update you with the best travel deals to and from Hawaii! We will keep you informed of all the best deals to have an enjoyable vacation on a budget!